We don’t know about you, but we can always tell when Spring has truly arrived – it’s Itchy Paws season at our house. This year it’s been particularly wet, with record-breaking rainfall, and it’s worse than usual.

French Bulldogs are known for allergies, and Torque’s itchy paws are no surprise. The new development this year has been Booker, Fran’s older Boston Terrier, showing the tell-tale sign of redness in his paws.

We understand that the redness is caused by porphyrin, which is a relatively benign chemical dogs excrete in their tears and saliva. It’s the cause of staining on fur both under the eyes and on the paws. By itself, porphyrin is harmless. It does permanently stain the fur, but if you can stop the excessive tearing, or paw-licking, when new fur grows in it will be the dog’s normal fur color.

The itching is probably caused by allergies and/or yeast. The wet Spring this year creates perfect conditions for both.

We try and we try

We’ve been dealing with itchy paws for a long time. Dax, Hope’s first Frenchie, was actually allergic to grass. And she absolutely refused to “do her business” on cement, so we had to do something with her paws every single time she came in from outdoors. We tried rinsing with water, but she wound up with dry/cracked paws. Baby wipes came next, but something in them made the itchiness worse. We finally wound up using witch hazel, straight up, to give her some relief.

Aside from the fact that we don’t want our dogs to be uncomfortable, or have red paws, the constant licking is really annoying. Especially in the dark in the middle of the night. The constant, repetitive licking is enough to drive us crazy. We love our dogs and we want them near us at night – so we keep at the quest!

When Hope mentioned Torque’s red paws and between-toe goo to the vet, she didn’t really like our coping mechanism of washing his paws with doggy shampoo every day. While the shampoo itself is fine, the frequency could rob his paws of natural oils and change the ph of his skin. She said to reserve the shampoo for once-a-week face washing and the occasional bath.

She did suggest we use Bactine. Regular, old, over-the-counter “wash your childhood boo-boos” Bactine. So we did. It reduced the goo factor, but didn’t seem to help the itchy paws or the redness.

Not alone by any means

Of course our dogs aren’t the only ones who are itchy-paw sufferers this time of year. We’ve seen quite a few posts on social media about it in the last couple of weeks.

One that we took special note of came from a dog nutrition specialist we know. She happened on an answer for her dogs – Gold Bond Foot Powder. She particularly liked that it has baking powder in it.

So – we’re trying it. If you have any tried-and-true solutions, we’d love to hear about them. We’ll report back on the foot powder. At this point, we’re willing to try just about anything that won’t harm our dogs.

Anything that makes life easier/smoother/less stressful is a good thing. A tiny thing that’s making a difference is a simple package of baby wipes near the back door.
Our house is weirdly and awkwardly arranged to the first thing you see when you walk in is the stove. (Unless the basement door is open – then it’s the stairs, or stars, if you take a tumble!) Which has made the stove a staging area for all the things you need as you come in or go out. Keys, poop bags, treats, etc.
Not the most convenient arrangement when you want to cook, but in a small space, you learn to make do.
Anyway, there’s been one recent addition to the flotsam that’s actually making a difference in a good way.
Baby wipes. Specifically hypo-allergenic baby wipes. 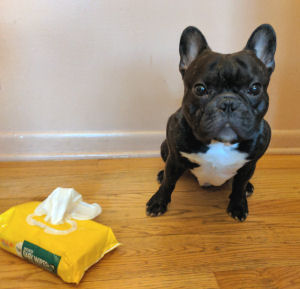 Just a quick swipe with a wipe when Torque comes inside minimizes contact allergy exposure.

Since about the middle of January, Torque’s been having some issues with allergies. At first it was just a bit of paw-licking. Then his paws were a bit raw and swollen, then he started losing some hair under his eyes, along with some redness. In other words, the little man was a mess.
At first we thought it had to be a food allergy that was just coming to the fore, since Hope took him away on vacation in early February and his whole environment changed.
So we put him on an elimination diet. And it made no difference whatsoever. The allergen had to be something environmental. With an extraordinarily warm, wet winter, some sort of mold is probably the culprit.
Torque is a two-year-old French Bulldog. And a very happy, athletic, active two year old. If he’s awake, he’s on the move and we don’t have a lot of time to “fuss” with him. Especially with Booker The Boston bouncing around, egging him on to play.
As soon as Torque steps in the house, we hit the baby wipes package and swipe his face and paws. It helps if we have a treat in our hands (There’s a treat jar on the stove, too, of course.) and ask him to “sit!” as soon as he hits the indoors. We don’t have time, or inclination, to mess with more than that.
The new system seems to be helping. He’s not gnawing at his paws so much and his face looks less irritated.
We have noticed one immediate improvement – the floors are lacking a few paw prints! Especially coming in from the wet weather, we’ve started swiping all the dogs’ paws with baby wipes. It only takes a moment and it’s already making a difference.

If your dog is miserable with contact allergies you may want to consider stronger measures – which may include using Pawz dog boots whenever your dog goes outside. They’re particularly effective for dogs with grass allergies.

Do you have a first aid kit for your dogs?

When Fran got home from an agility trial about 2 p.m. Saturday, Torque’s face was all swollen. She called me at the shop and we went through the “how much of an emergency is this?” questions:

The list all had “he’s okay” results – so no immediate trip to the emergency vet. We know that lumpy swelling is usually a sign of an allergic reaction to some insect bite or sting, so we decided to give him a Benadryl and watch him. He was a bit lumpy the rest of the day, but the consensus among my Facebook friends (including a veterinarian or two), was to give him another dose and see how he was in the morning.

Sunday morning Torque looked and acted fine. The swelling had disappeared and he was his usual exuberant self; eating, playing, running around normally. So the entire family packed up and went to the second day of the agility trial – both Booker and Teddy were entered.

We had a fun day. Booker and Teddy didn’t qualify, but there were lots of good bits to both their performances. We got to spend time watching some wonderful dogs and people compete, spent time with friends. I took Torque around the venue to get him used to being at agility trials and even took him to play at the practice jump. He was fine.

Then we got home – about 3 p.m. And I took a look at Torque and his face was lumpy and 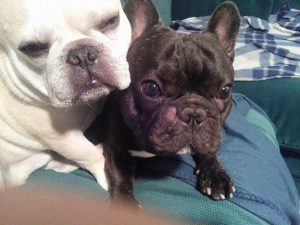 swollen again. He was showing no other signs of trouble, so I gave him another Benadryl. I asked my long-distance veterinarian friend her advice, and she confirmed that as long as he wasn’t having any other symptoms, I could wait until this morning to take him to the vet.

The ebb and flow of the swelling and odd timing was a bit of a puzzle for them – but, as my friend had predicted for treatment, he got a steroid shot to calm his system down and three more days on Benadryl to keep it under control. We’re hoping that’s the end of this episode.

All of this got me thinking, we’re very “into” dogs and have all kinds of things of hand in case of emergency: Benadryl, hydrogen peroxide, gauze tape and pads, tweezers, antiseptic wash, flashlight, styptic powder (or corn starch) etc. Do you? How about dedicating a shelf in the medicine cabinet or a bin in the vanity for “dog stuff?” And putting a little kit together for the car. We should all be prepared, just in case of emergency. 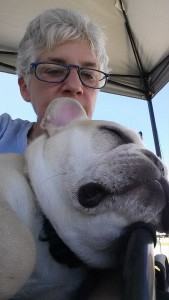 We love having the opportunity to travel with our dogs. And we’re fortunate that they’re all terrific in the car.

Never utter a peep. Which is why, on my (Hope’s) recent road trip, I didn’t notice until a mid-afternoon potty break (for me and the dogs!) that Teddy had been bitten by something and his face was swelling up.

Teddy has had a couple of allergic reactions over the years, so I always have some Benadryl with me in the dog-travel-box. I gave him a dose and decided there wasn’t anything else I could do at the time, other than to continue to our destination and check him every half hour/45 minutes.

Which is why we wound up having a very difficult afternoon. It’s all Teddy’s fault.

The six-lane highway we were traveling on was completely stopped. Apparently there was an accident up ahead. All I could see was an endless line of cars and semi-trucks, all stopped dead. For over an hour.

Since we weren’t moving, I was able to check on Teddy. He was fine – breathing normal, swelling and redness next to his nose already starting to subside.

When we finally got moving again – and I have absolutely no idea why we’d stopped, because the highway was entirely clear by the time we got to wherever it had been – we motored along happily until our next Teddy check.

It wound up being only about 30 miles from our destination, but I thought it was important to check him on schedule. He was fine.

But he was also why we were where we were when we were – where I really, really, would rather not have been.

Back on the highway, a big, white SUV went racing by in the lane to the left. Then it cut me off, zooming for what he/she thought was an exit, and turned out to be a truck weigh station. He must have been going over 100 mph. When he saw it wasn’t an exit, zoomed back, cutting me off and racing down the highway – with three police cruisers now in pursuit.

I could see the police closing in and the SUV attempting to weave in and out of traffic, finally skidding out of control, hitting the center barrier, and spinning back across all three lanes of traffic. The three police cars surrounded it – stopped any which way on the highway.

Meanwhile, all the non-involved traffic (like me!) was trying to figure out which lane to be in, how slow we should be going, which lane we could creep by the debris, and how to let three lanes condense into one shoulder-creeping line without anyone else being smushed.

I saw one of the officers grab the SUV driver’s door open – but I couldn’t see anything inside other than the side air bag had deployed.

Much too much excitement – and it was all Teddy’s fault.