Taking care of your dog’s teeth isn’t fun. It’s not convenient. And you could, possibly, get nipped. It’s also one of the most important things you can do for your dog’s health.

A friend of ours found this out the hard way. Last week her dog had periodontal surgery. He lost about 10 teeth, and is on massive antibiotics to stop the bone loss due to bacterial disease. Left untreated, the gum disease could have led to massive systemic infection, and damage to his heart. Her dog is four years old.

Fortunately, caring for your dog’s teeth is easy. Veterinarians recommend brushing twice a day, but for many/most of us, that’s just not going to happen. We make sure to brush our dog’s teeth once a week – it happens more often if we notice something going on. Human toothpaste isn’t recommended – get a good one designed for dogs, like our own GG Naturals Dog Toothpaste. Just dab some on a piece of gauze or washcloth and rub your dog’s teeth. Done on a regular basis, your dog may not love it, but he/she will get used to it.

We’re lucky that our dogs all seem to have a mouth chemistry that doesn’t contribute to dental disease. Our friend wasn’t lucky at all. She didn’t expect any problems since none of her other dogs have had the issue. And dogs are notorious for not showing signs of disease until it’s advanced too far to reverse.

According to Web MD, the signs of periodontal disease in dogs include:

We don’t even want to think about what the dental surgery cost our friend. Not to mention the worry and recovery time. Her dog’s entire future is changed – his favorite hard chew toys are now off-limits. She only noticed an issue when one of her dog’s teeth seemed loose. The disease had already progressed too far to save the teeth.

Benefits of caring for dog’s teeth

To be completely honest, we’re not so much obsessed with our dogs having pretty teeth as we are terrified of any of them undergoing anesthesia. We’ve only heard of one veterinarian in our area who does dog teeth-cleaning without putting the dog under anesthesia. And, while we trust our veterinarian, we do have flat-faced dogs who have more difficulty with anesthesia. Since there’s a simple thing we can do to put it off as long as possible, or avoid it entirely, we’re going to do it. Tango is our oldest dog at 11. So far, so good. Like many Toy breed dogs (he’s a Brussels Griffon), Tango never had a full complement of teeth. But he still has all of them, and has never had to have a professional cleaning.

Start where you are

Even just rubbing your dog’s teeth and gums with a washcloth will help. While you’re waiting for your Dog Toothpaste to arrive – start. Small steps can make a big difference and it may save worry, money, and your dog’s teeth.

Most people are familiar with the daily routine and expenses (of both time and money) of dog care. That involves feeding, usually two times a day, the best dog food you’re able to provide. It’s also daily walks, both for elimination and exercise. It should also include daily training games. And some cuddle time, too.

Many first-time dog owners don’t realize there’s more to it than that. Even aside from annual veterinary visits, or periodic appointments with a groomer.

Since we sisters have four dogs, all very different, and all with individual characteristics, we thought we’d share our dog care routine. We realize we have an excessive number of dogs, and we’re far more obsessed with dog stuff than “normal” people, but it gives an idea of the things that should be dealt with on a regular basis.

On Mondays and Thursdays every dog gets brushed. Three of our dogs are short-coated, and a brisk going-over with a rubber curry brush works for them. Simon and Booker, the Boston Terriers, shed a little bit. With brushing it’s even less. Torque, the French Bulldog, sheds continually and abundantly. Every time we brush him we’re surprised by the amount of fur that comes off.

Tango is a rough-coated Brussels Griffon and gets slicker-brushed those days. His bearded-and-mustachioed face gets extra washes on Wednesday and Friday. Without that extra care routine, he develops sores at the corners of his eyes where gunk can build up.

All of our dogs have short faces – it’s the look we prefer. But it does come with some extra care needed. We pay extra attention to wrinkles and folds, wiping as needed. If they’re not kept clean and dry, “fold dermatitis” happens and it’s not fun for anyone.

Every Sunday morning we’re home is “ablutions.” All four dogs get their nails trimmed. That’s 66 nails (Torque has his dew claws.). Then we move on to brushing teeth, washing faces, and cleaning ears.

We check each dog over and give extra attention where it’s needed. Booker has a couple of places between teeth that need extra care – we’ve even been known to floss if required. That attention to our dogs’ teeth has meant that none of their teeth has needed professional cleaning in years. Which means no anesthesia. It’s something we avoid if at all possible.

Tango’s face fur gets trimmed every other week before we wash his face. It keeps the gunk to a minimum.

We douse Torque’s feet with medicated powder during his turn. It keeps him from itching and has reduced the foot-licking. Which means no redness or irritation.

Torque also gets an application of Nose & Paw Balm – his nose leather tends to dry out and crack unless we keep it moisturized.

Simon, 2-years-old and the best-behaved for grooming maintenance, doesn’t need any extra weekly attention. But don’t think we get off scot-free. We don’t know why, but he’s not a clean pooper. His poops are totally normal, but his butt always needs wiping when he’s done. Every single time.

Worth all the work

All together, we probably spend about an hour per dog each week on regular care. It adds up because we do have multiple dogs, and the two of us usually work together. So that’s about eight man-hours per week, just to take care of four dogs.

That’s not counting feeding and walking. 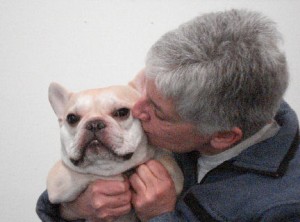 When we were kids our mom would take us to the International Kennel Club show every year. It was one of the biggest dog shows in the country and one of the only ones where the dogs were “benched” – which meant that the dogs and their owners/handlers, whenever they weren’t actually showing, stayed in an assigned spot most of the day and the public could wander around, look at the dogs, talk to the people, and really learn about the world of dog shows.

We loved it. We’d spend hours admiring the dogs and asking a billion questions of the owners. (Another highlight was real fudge from one of the vendors.) And, as it turns out, years later, one of the wonderful dog owners who’d spent time telling us all about her Brussels Griffons, had become a Griffie friend – and we hadn’t realized the connection.

When I was a little girl my favorite breeds to admire (before we had a dog of our own) were Irish Wolfhounds and Bull Mastiffs. And Great Danes. And Scottish Deerhounds. These giant breeds just drew me like no others. As I learned more about dogs, and after we got our first Boston Terrier when I was nine years old, I realized it wasn’t to be – our house is small, our yard is small, and perhaps most importantly – we’re small people.

Even if we had a big enough house, a decent-sized yard, and the giant breeds didn’t break your heart with their unfairly-short life spans, I know now I’ll never own one. The what-ifs would haunt me. If something happened, there’s no way I could lift a 100 plus pound dog to get it to emergency care. There’s no way that I could control an animal that size if it “took off” on me during a walk. And even the best-trained dogs can have their moments.

I have found my perfect breed and I always intend to have at least one French Bulldog (or more!) by my side. They’re the right size and the right temperament for me. And, when I need to, or want to, I can lift and carry them. And squeeze them and hug them and cuddle them. Even if they don’t much like it.