Dogs have chores, too

Some people enjoy the chores that make a house a home. We wish we were among them, but, for the most part, we consider housework to be a necessary evil. We want a comfy home, so we have to put in the work to make it that way.

Since they are members of the family, our dogs have chores, too.

What they can actually accomplish is limited by their complete lack of thumbs. Even if we ask them to “go get” something – it has to be something that we don’t mind gets covered in dog slobber.

All of our dogs know “put your toys away” games, and we play at least once a week. It’s not really a “chore” – since we dump the toys out for them to put back in the bin. It’s a dog training game we all love.

Ever since Hope’s French Bulldog Dax broke a tooth “helping” with the vacuuming years ago, the dogs’ assistance is pretty much limited to being cute while we work. Because we don’t really want them:

And of course it’s always fun trying to move the furniture while the dogs are jumping on and off. We didn’t really want to clean behind there anyway!

The dogs’ actual specialty is giving us a reason to do the housekeeping. Like when you hear the unmistakable sounds of a dog being sick at four in the morning. You may not actually have planned to clean the rug that day, but now it’s on the agenda.

None of our dogs have long fur, but that doesn’t mean it doesn’t accumulate if we attempt to ignore it. So the floors get attention.

And just because we don’t have picky eaters, doesn’t mean they’re tidy. Either eating or drinking. Oddly, one of the dogs (not mentioning Simon’s name) doesn’t understand the concept of closing his mouth when he’s done drinking. The puddles he makes are just water, but they still have to be cleaned.

For the ones we love

We may not like doing housework, but making a nice home for the ones you love is motivation enough. Even if they never notice, or care. We know. 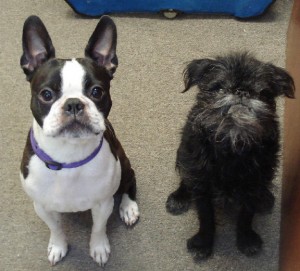 Hi – it’s been a while… sorry about that. I’ve been caught up in other work!

Anyway, the topic of the day is, Do your dogs help with the housework? Or are they lazy bums and just watch from the couch? Or attack the vacuum and need to be locked up?

My dogs sometimes keep me company when I’m cleaning. Sometimes they like to be in the same room or get in the way. Other times one is with me and the other one is in bed in another room.

The reason this came up is that I decided to vacuum the ring today. Our old vacuum cleaner died a little while ago and as it’s been pretty quiet today, I decided to put together the new one and give it a try. (Works great, by the way.) But I decided to keep Tango and Booker in the office, and Tango let me know he was not happy with that decision! I could hear him over the vacuum.

One of our dogs had to be locked up when we were vacuuming because she actually broke a tooth on the vacuum. That was an expensive lesson. Our current group just follows us around, perhaps trying to see if we’re dropping crumbs.