Tango is looking a little scruffy these days. Grooming in the time of Corona Virus is problematic, to say the least. We don’t know why dog groomers haven’t been considered “essential” – most of what groomers do is absolutely vital to dogs’ health and well-being! The AKC is keeping a chart to update us on the status of dog businesses and services in each state.

Our own situation is a bit different at the moment. The groomer who’s been taking care of Tango (a rough Brussels Griffon and our only long-haired dog), closed her shop at the end of 2019 in a planned retirement. We knew we’d be facing this year without our Tango-support staff. We just didn’t know every groomer in the area would be closed when it was time for Tango to get a touch-up!

So, Fran’s Brussels Griffon boy didn’t get a haircut for his 11th birthday. He did get his face washed, teeth brushed, nails buzzed, beard/mustache tidied, and a sanitary trim. But he’s still a scruffy dude.

We understand that Google searches for “dog nail trimmers” are up tremendously. We’ve also seen some incredibly creative people posting their solutions on social media. Our favorite was the incredibly clever woman who wrapped her head with plastic wrap, slathered peanut butter on her forehead, and got to work trimming her dog’s nails. Fortunately, the video showed she was doing it outside. We can’t even imagine the mess attempting this anywhere else for the first time.

It seemed to work for her – but she had a big retriever on a grooming table. Our usual position for nails is Fran holding the current victim upside down on her lap while she sits in a chair, and Hope doubled over grinding away with the Dremel tool sanding drum. It works for us, but does require two people.

Oddly enough, our best dog for nails is Simon, who takes a nap and lets us do whatever we want. Tango is next best for behavior accolades, but he flexes his toes constantly. He has adorable, tiny round paws. You wouldn’t think that the flexion would be a big deal, but Hope’s hands get sore trying to keep him in place and uninjured.

Tricks of the trade

We wish we had some magic formula for grooming, but there isn’t one. There are highly-skilled professionals who are excellent at what they do and we hope they can safely return to work in the near future. All of the people with long-haired dogs, we’re sure, agree.

Whenever Fran brought Tango home from the groomer, you could always tell he felt altogether spiffy. He’d stick his little butt up in the air, give a little yell, and go tearing around the house like he was all that and then some. Does your dog seem to know when he or she looks particularly terrific? Isn’t it funny that they know and they’re pretty pleased with themselves?

For the moment, Tango doesn’t have a lot to be proud of, appearance-wise. We’re keeping him clean and making sure he can see, but our scissor skills are minimal. It seems that our complete lack of skill in cutting any kind of straight line is magnified with fur. Or you can totally see every single, too-straight line where the scissors weren’t quite where they should have been.

The nice thing is that, while Tango knows when he looks particularly great, he doesn’t seem to be at all vain now that he’s a scruffy beastie. He doesn’t care that his ears look crooked, or his beard is uneven. Much like age, if he doesn’t mind, it doesn’t matter. But we do hope that it’s safe for grooming to start up again around here. There’s only so many bad haircuts a boy should have to endure.

Trimming dogs’ nails isn’t the dog equivalent of a human’s trip to the salon.

The dog doesn’t understand what’s going on. He probably doesn’t like a stranger messing with his paws. And he definitely doesn’t want any part of those scary clippers. Much less that awful-sounding grinding machine.

But our dogs need short nails. There are very few of us who take our dogs on enough pavement-based walks to keep them “naturally” sanded down.

So how can we make it less traumatic for everyone?

Lots of puppy advice says “Play with your puppy’s feet to get him accustomed to his paws being handled.” Great advice, except we’ve never met anyone who thought it worked. Dogs know the difference between sitting on the couch watching TV and messing with his paws and having the nail clipper handy.

Part of it could be that we tense up, knowing that our dogs can be resistant to having their nails done. Dogs can sense our tension. They may not know exactly what’s causing it, but if you think something awful’s about to happen, they think so, too!

Rather than planning to “do your dog’s nails,” have a plan for teaching your dog to accept having a “mani/pedi.”

If you use a clipper, have it next to you while you’re watching TV and play with it as your dog is next to you. Open and close it. Pretend to use it on yourself. Let your dog sniff it. And put it aside. Do it at intervals until your dog ignores it.

If you’re using an electric grinding tool (like a Dremel), do the same thing. Let your dog see it, sniff it, become accustomed to it. Turn it on for a second, then off. Play with it and let it be part of the scenery. You’re sending your dog the message that it’s not particularly important, and definitely not a cause for anxiety.

Let whatever tool you’re using touch your dog’s paw. Don’t attempt to cut or grind the nail at that point. Just let it get close enough. And put it down. Get your dog used to every stage of the process gradually: seeing it, hearing it, touching it, using it.

Keep to the gradual introduction as long as you can. Don’t try for all the nails – be happy if you get one done. Have treats ready to reward for any stage that’s a bit farther than you got before.

Trimming dog nails is always easier with two people; one to hold the dog while giving treats, and the other to do the trimming or grinding. But you can do it yourself if you’re patient.

If you feel yourself getting frustrated – let it go. There’s always another time.

We’ve all seen the videos of children getting their first haircuts. Some are rock stars and have a wonderful time. Others believe they’re being tortured by monsters from the depths of hell. Some dogs are cool, calm, and collected. Others will squirm until the task becomes impossible.

But if you take is slow and steady, your dog will learn to allow nail trims.

We use a grinder to do our dogs’ nails. We get together on Sunday mornings to do all 66 dog nails in the house (Torque has dew claws.) About once a month we do 86 nails (the Bearded Dragon has five toes on each foot).

Booker (7-year old Boston Terrier) used to be tolerant. Until Fran got Simon and he regressed to the point where we had to retrain him completely. We went back to the beginning – one toe at a time. After a year, we’re back to being able to do all four paws in one session. With a “cookie” for every paw, instead of every nail.

Be patient with your dog

If you take the time to gradually introduce, or re-train your dog, you will get him to accept the inevitable. It may never be a “favorite” for either of you, but keeping your trimming dog nails is part of proper care. Your dog will be more comfortable and will walk with better posture. Your clothes won’t get snagged and your legs won’t be bruised.  Worth mentioning – your floors won’t get scratched. It’s worth it. 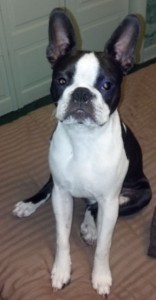 Tango is at the groomer’s for a much-needed haircut. So Booker and I are here at the shop by ourselves. That means that Booker gets uninterrupted training and play-time. He seems to enjoy the one-on-one time with me.

I’ll take more but shorter training breaks with him. So hopefully he’ll be very tired when we go home later! I know that Tango will be tired (after his initial crazy puppy zoomies when he gets back) when I bring him back to the shop later. I know that at first he and Booker will race around the ring like lunatics, like they haven’t seen each other in years!

There’s nothing better than having tired dogs in the evening. They’ll be sprawled out on the couch or the floor, and Hope and I can watch TV in peace. Or take a pre-bed nap with our sleepy dogs. Yes, I’ve reached the age when I fall asleep on the couch after dinner. The thing that makes me feel better is that on the evenings that I go out for dog training, I’m wide awake when I get home. And usually stay that way until I decide to hit the sack. 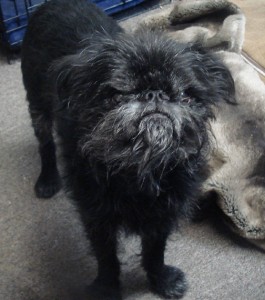 I posted a picture of Tango on Facebook today, saying that he’s looking scruffy. And a friend said that it’s hard to have a good hair day in the dry winter air. And she’s right! It is cold and dry, and my hair isn’t looking that great, either!

But the sad truth is that I just haven’t taken Tango to the groomer in a while. He needs it! He usually looks much more polished and suave and just slightly scruffy. He’s presentable as he is, but not looking his best.

Tango is a rough coated Brussels Griffon. Brussels Griffons (Griffs) come in 2 coat types – rough and smooth. Smooth Griffs don’t have the mustache or beard, and they don’t need to be groomed. Just a brushing a couple of times a week will do. Rough Griffs, on the other hand, should actually be stripped by hand if they’re going to be shown in conformation. That means pulling out the top layer of fur. Yes, ouch. Those of us who don’t show their Griffs in the breed ring usually take the lazy route and just take their dogs to the groomer. I love my groomer! She makes Tango look like a real Brussels Griffon, even with a clipper and scissors! He looks like he’s been stripped for the ring! So handsome. I’d better make an appointment…