The beginning of dog rules

Once upon a time there were two little girls who begged and begged their mother for a dog.

“Okay,” Mother eventually said, having been worn down by constant whining, chore completion, and an impressive book report all about Boston Terriers (Mother’s favorite breed). “But here are the dog rules: the dog can’t go in the living room and can’t be on the furniture. No begging at the table. He’ll sleep in the kitchen, not in your room or ever on the bed.”

The two little girls, who were dog-mad and would have agreed to anything, solemnly promised.

Having reached contractual agreement, six-week-old Spunky the Boston Terrier joined the family. He was the best friend two little girls could ever have. And he was a good boy and never went in the living room (without an invitation), never jumped up on the furniture (without an invitation), and never slept in the girls’ beds. He obeyed the dog rules as diligently as he had to.

It was never admitted out loud, but there may have been occasions (thunderstorms) that Spunky was allowed in Mother’s room. It’s unclear who needed the company. There are suspicions it may have been Mother.

In time, as all good dogs, Spunky crossed the Rainbow Bridge to wait for Mother. The girls, now almost-grown but not quite, did more research and, with Mother’s agreement, Brussels Griffon Dragon joined the family. He was not allowed in the living room, not allowed on the furniture, but did sleep in the girls’ room. In his own bed, until Mother closed the door and said “good night.” After that, no one who knows is saying.

Dragon was also a good boy and kept the family safe from all intruders. He sat on the window sill at the back of the breakfast nook and “barked his fool head off,” according to Mother. One day an old towel appeared on the window sill. Mother said it was because of condensation. The girls did not believe her.

As children do, the girls grew up. One day one of the girls opened the door and yelled “Are you decent? I have someone I want you to meet!”

Mother may have hoped it was a suitor. She hollered back “No, come on in!”

Her possible hopes were in vain – it was a Boston Terrier puppy. They named him Daemon.

Daemon decided that the most comfortable place to watch television in the evening was with his elbow across Mother’s leg. He had claimed the territory of both Mother and the couch. Mother may have had a particular soft spot for Boston Terriers. She did not put up much of a fight.

Dragon and Daemon were both very good boys. Who obeyed all the dog rules of the house, of which there were very few. They cuddled on the furniture (as long as they weren’t in the living room), minded their manners when the family ate, and only sometimes burrowed underneath the covers in the girls’ beds.

In Part II – The Dog Rules Stretch Even More 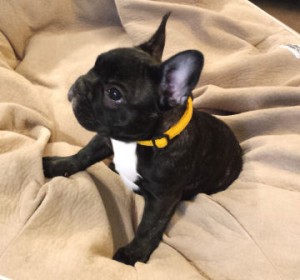 Forgive me if I get a little disgusting today.

I was rudely awakened at 4:18 this morning by the sound of repeated licking. Torque, my absolutely adorable six-month-old French Bulldog puppy had vomited in bed and was attempting to clean it up.

It’s the first time I can recall that this icky aspect of dog ownership has happened. Not that no other dog has thrown up in the middle of the night – but all of them before Torque had the courtesy to get off the bed first. Or, now that I think about it, made those tell-tale, “tide’s coming in” ocean noises in preparation, giving me time to wake up, grab them, and hit the floor.

It’s not a lot of fun trying to clean up a dog and a bed in the wee hours of the morning. And you have to do it – there’s no other way you’re going to get back to sleep, as if that’s even possible.

The easy solution, for people who don’t get it, is to banish the dog from bed. I choose to sleep with my dogs – because they’re soft and warm and cuddly and I love them. Even when they get sick at four in the morning. Because – that face, you know?