We have a friend who is constantly “managing” her dogs. She has six and not all of them get along with each other. And the groups aren’t consistent – individual dogs who were buddies yesterday can’t stand the sight of each other today.

It must be exhausting. One of the absolute “musts” in our house is that all the dogs get along. It’s not that we don’t have occasional spats. Of course we do. Some days the dogs are like three-year-olds: “Mom, he looked at me!”

“He looked at me first!”

“Tell him to stop looking!”

At which point we calmly, hands over our ears, leave the room.

Dealing with the occasional brother battle is different than bringing a new dog home for the first time, especially if the newcomer is a puppy. Monitoring all interactions with a new dog is crucial. And a good familiarity with dog body language is a big help.

Once we know that the resident dogs aren’t planning to physically harm the new dog, we pretty much let them sort out their relationships for themselves. We try to step in only when one of the dogs seems out of control, or someone else is tired of being harassed.

Get along, little doggie

The hardest case we’ve ever seen was Dax, Hope’s first French Bulldog. Dax wasn’t the sweetest dog, but she wasn’t particularly obnoxious, either. When Hope brought Teddy home as a puppy, he instantly adored his big sister. Followed her everywhere. Grabbed her face and hung on.

She completely and totally ignored him.

It was months before she even acknowledged his existence. And even then, it was to tell him to “knock it off!” – she’d finally had enough of him chewing on her face. It was probably about the same time he reached more than half her weight and his “attentions” really started to hurt.

Teddy was thrilled! His idol was finally paying attention to him. It didn’t matter that the attention wasn’t “good.” His persistence paid off. They became great friends and playmates for the rest of her life.

Our current cast of characters is pretty interesting, too. Simon just turned two years old this Summer. Tango is 11. Simon is a fire plug of a Boston Terrier, 18 pounds of muscle. Tango is a long, skinny, bendy Brussels Griffon. They adore each other.

Watching them, you’d swear we just lied. Every time Simon walks by Tango, Tango jumps up and yells at Simon. And Simon will deliberately rush at Tango and bop him with his paws, just to annoy him. Their interactions are incredibly loud, sound horrible, look nasty, and they both enjoy them enormously.

It took us a while to recognize that. Both of the dogs were having fun. At first, we thought Tango needed protection from the younger, stronger, heavier Simon. Then we noticed that it was Tango initiating the fuss-fests at least half the time. It’s how these two dogs’ relationship has developed. They understand it and it works for them. The other two dogs stay out of it. Smart pups!

Just like little kids, unless disagreements become violent, it’s probably best to let them work it out on their own. There’s no guarantee that they’ll be friends for life, but you’ll have a chance for peace.

This week Hope met some friends from college for dinner. We share the bond of memories, history, and common experience. One friend is a bff who was in town for a few days , another a friend, the third a friendly acquaintance. College was a long time ago, so there’s a lot of history and a lot of changes.

Despite the fact we haven’t seen each other in nine years (!), the bond was instantly back and conversation was easy, interesting, involved a lot of laughing, a little reminiscing, and no politics whatsoever. One of us is not on the same end of that spectrum as the others. Since we’re all grown up, we chose to cherish friendship over whatever disagreements we may have.

We wound up closing the place down – talking for hours. Since all we drank was water, it was a fun evening fueled by personality alone.

Looking at the evening from a next-day perspective, one really interesting factor stands out. Three of us were dog people. The fourth, Hope’s college bff, has never had a dog, isn’t interested in dogs, and “wouldn’t let an animal dictate my schedule.”

She very politely tolerated the rest of us – because half the evening was spent talking dogs.

The commonality creates an instant connection. The woman Hope barely knew in college is the one she wound up sharing pictures, videos, and swapping dog stories with. The fourth woman, whose last dog passed away about four years ago, was telling dog stories with us – recalling with much love and many laughs our dogs’ individual personalities, quirks, brilliance, and naughtiness.

All three of the others are teachers. We didn’t talk about school much. We talked about dogs. That instant bond of shared experience clicked in. We’ve talked before about how dogs create community. This is just another example.

Hope is the only one who does “stuff” with her dog. And the others weren’t really interested in that stuff. Their dogs, past, and current, are integral parts of their lives and the source of great joy, amusement, companionship, and, ultimately, sorrow.

Dog people get it

Of course Hope asked the woman who lost her dog a while back asked if/when she was planning another. Her response was telling – yes, after she retires in a few years. Because, at this point, “it wouldn’t be fair to the dog.”

We understand completely. She works long hours, travels to conferences often, and makes trips to the west coast to see one of her children.

She is planning the next dog, though. A smaller one (her Killian was a black Lab mix) that she could travel with. One that wouldn’t shed quite as much – she’d prefer not to deal with the fur.

She never said she didn’t want to be “tied down.” Or that dogs are inconvenient.

Home is where are dogs are

The evening came to an end when the woman Hope barely knew before and had the longest drive home, looked at the time and announced she had to get home to Eli, her Sheltie. That’s when Hope’s friend said she’d never allow her comings and goings to be dictated by an animal’s needs.

The three of us looked at her like she was nuts and, in unison, said “They’re so worth it.”

How do all your dogs get along? 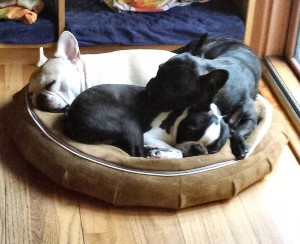 It’s a question we hear a lot – between Fran and me, there are four dogs around; her Boston Terrier Booker and Brussels Griffon Tango, and my French Bulldogs Teddy and Torque.

The truth is – they get along great, for the most part. Tango is the oldest and really enjoys pouncing on Torque, growling and, apparently, biting him. Tango doesn’t actually have many teeth, so Torque thinks it’s pretty funny and bounces right back for more.

Torque likes to chew on ears (both human and canine), which the other dogs find annoying and let him know. He’s also the youngest, most easy-going of the bunch, and least likely to sulk or take anything to heart.

Teddy is kind of a cuddly blob. He doesn’t instigate any mischief, but is the object of both Booker and Torque’s teasing play – they’re always trying to get Teddy to join in the fun.

Booker is the most active dog in the house – which makes sense, because he’s a Boston Terrier. If you want a couch potato – this is not your breed. He’s also sweet and playful and incredibly soft – if you can get him to sit still long enough to be petted.

We haven’t (knock wood) had any serious battles among this crew – but that doesn’t mean we’ve always been immune. Many years ago we had a couple of male dogs that would, on rare occasions, get into real, serious spats. Fran made the mistake one time of reaching in and trying to pull them apart. A couple of stitches were her reward.

Ever since then, we’ve had a “puppy battle protocol” which we actually practice, just like fire drills. When you hear a dog fight, raise your hands over your head, wave them around frantically, scream like a banshee and run in the opposite direction.

It astonishes the dogs so much they break off what they’re doing and follow to see what the heck you’re up to. Works every time.